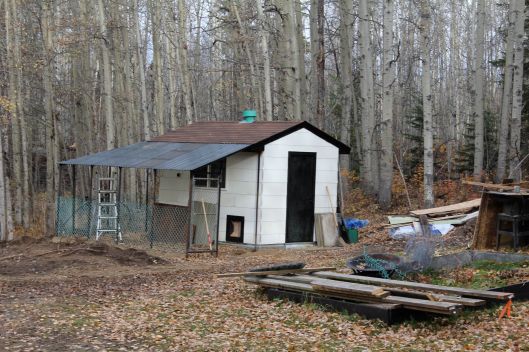 August and September were busy months here at cabinorganic. It started with a phone call from Grandpa Danser. He was bringing the backhoe and ‘chicken coop’ over from Clive (about an hour away) that weekend. I was so excited! I had spent the last few years fantasizing about having our own chickens and was waiting for the right moment to start setting up the coop. This was definitely it. Yes, it was finally time to get moving!

The process actually started a few years ago when Grandpa Danser offered to pass along this sturdy shed to us to use as a chicken coop. We were happy to put it to good use but a few things kept us from getting started right away. The first was that I was pregnant and super busy working and commuting to the city everyday. Then, once Chayton was born, there was just no spare time to start new projects.

Until now. Suddenly, the time was right. 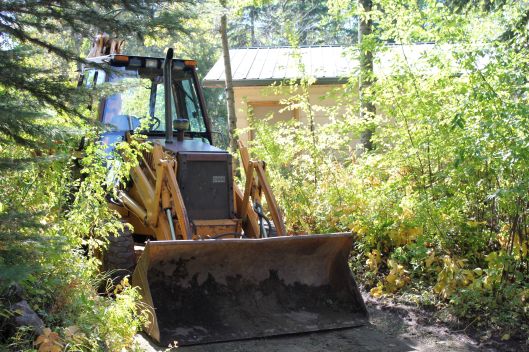 Grandma and Grandpa Danser arrived with the backhoe and trailer early one Autumn day after a long, slow ride to Pigeon Lake. Riding behind on the trailer was the shed. It needed a little work but I could already envision happy chickens moving in and making themselves right at home. 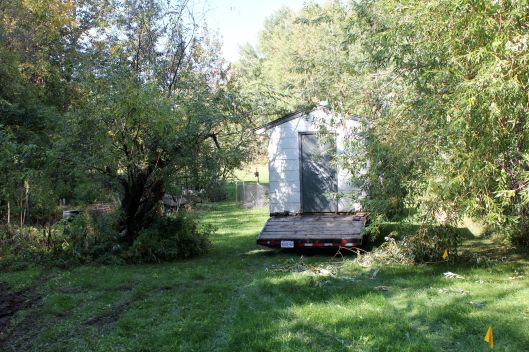 Grandpa parked the trailer in the yard and got straight to work with his backhoe, clearing a patch of land next to the greenhouse for the coop and leveling it. 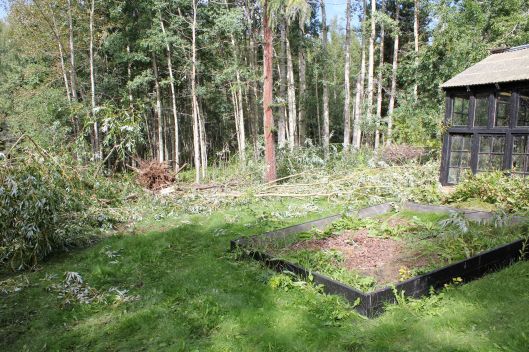 We took down quite a few trees but many were already dead or dying so it was nice to clear them out. Both Grandpa and Brian spent a few weekends cutting up the trees with the chainsaw and burning the smaller branches on a giant burn pile. We now have a gigantic wood pile for winter fires. 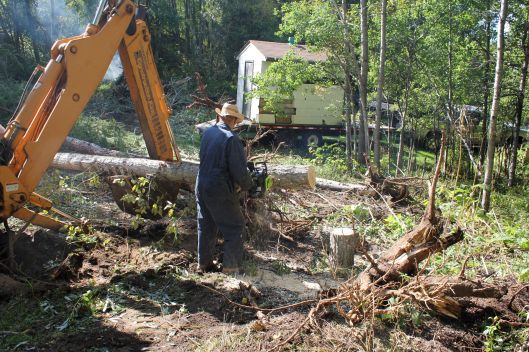 I brought Chayton out everyday in his blue wagon to watch the action. He loved climbing on the piles of branches and crawling through the mud. He loved visiting with Grandma while watching Grandpa and dad work. 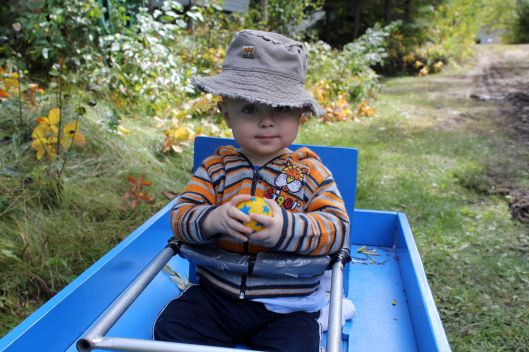 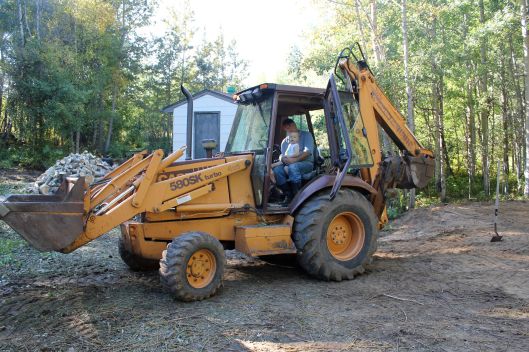 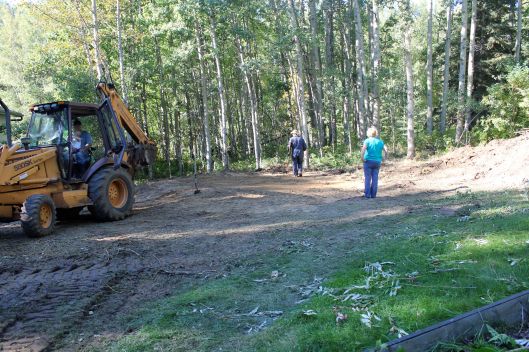 Once the site was ready, Grandpa unloaded the shed. Then he and grandma spent a weekend carefully removing all of the slate shingles, re-papering the exterior walls, and then putting them back on again. This was a delicate and tedious job as the slates were very fragile and kept breaking. There were some shingles missing so whatever was left was used for the front and sides of the shed while the back was covered with tin. Grandpa also installed a ‘new’ (used) window- (a larger one that can open), put tin flashing around the bottom of the shed to keep predators out, and cut a pop hole for the chickens. 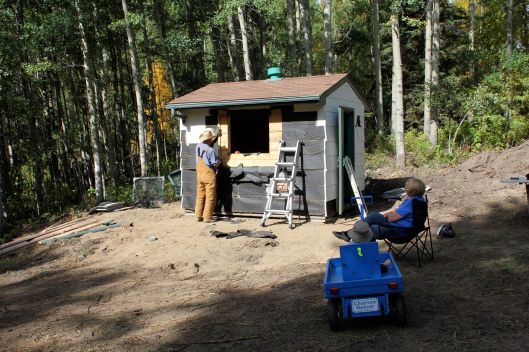 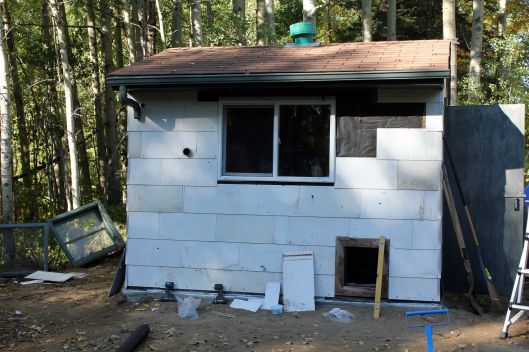 Once the slate shingles were in place, Grandma carefully washed them in preparation for painting. 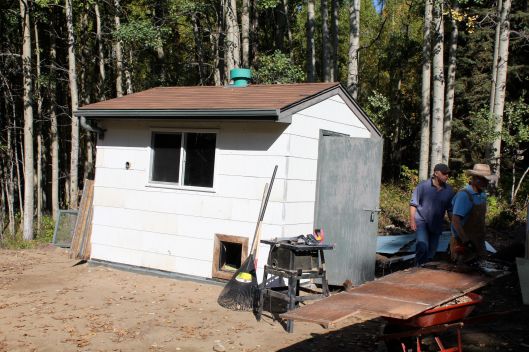 Next, Grandpa put in some posts for the chicken yard and later he and Brian began fastening some chain link fencing to it. The men also worked on the interior of the shed. Grandpa insulated the floor with styrofoam, laid plank flooring over that, and then put a layer of concrete over that for easy cleaning. The walls and ceiling were insulated and extra ventilation was built in. 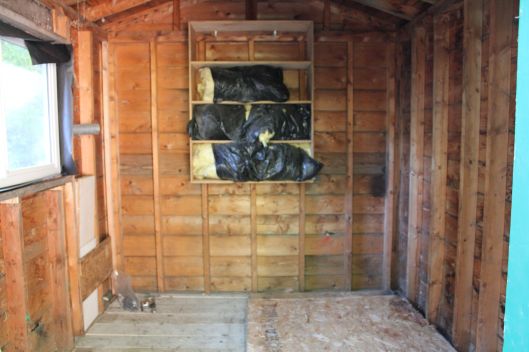 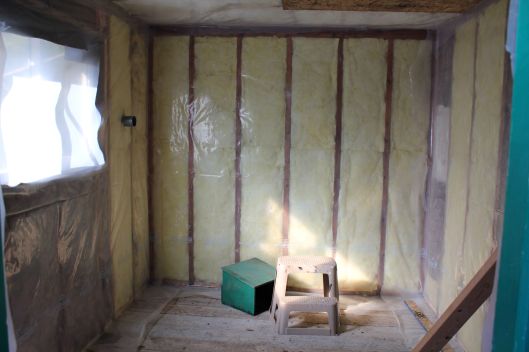 Here’s Grandpa Danser hard at work and truly in his element. I love spending time with this creative and hard-working man. 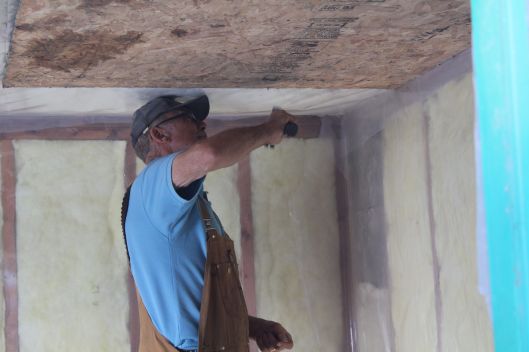 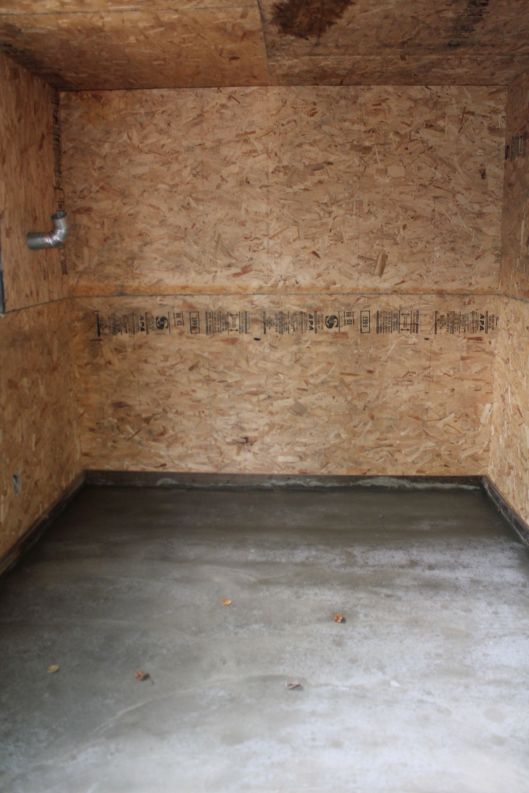 [There’s a side story here concerning the concrete floor: When I went out to check up on Grandpa, he proudly opened the door to show me a perfectly freshly-laid concrete floor. Lucy had followed me out as we were on our way for a walk. She was so excited that she ran into the shed! She immediately knew that something was wrong and turned and ran out of the shed but not without leaving a circle of dog prints in the concrete. I cried out in horror but Grandpa Danser just laughed heartily and simply went to work, smoothing out the floor again. Later, we scratched in Chayton’s name and the date on the threshold.] 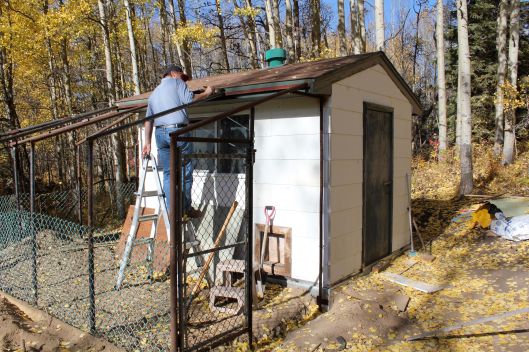 He built a wooden frame above the fence posts and installed some clear plastic roofing that Grandpa Danser had rescued from being thrown away. It has some screw holes in it but we can easily cover those.

I should mention here that while Grandma, Grandpa and Brian were hard at work on the coop, I was busy taking care of Chayton and in the kitchen rustling up some hearty meals for the crew. 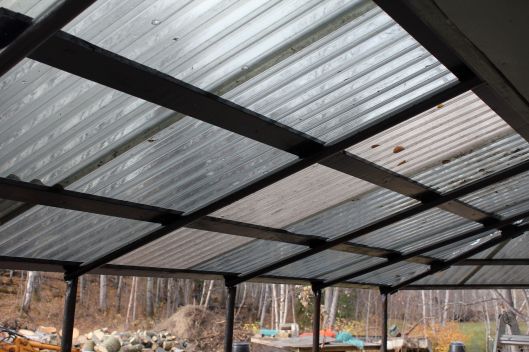 Here is the chicken coop as it looks today (only today it is covered in snow!). There is still some work to be done. Brian has already installed the electrical power but still needs to paint the interior and install the heat lamp, nesting boxes and roosts. We also need to finish the pop hole door, the exterior fencing (top half) and paint the exterior (a vivid deep red).

I love how almost everything about this project is made from recycled and reused materials. From the new window, the tin, the metal poles, the plastic roofing, the fencing, and even the shed itself.

I also love how our family was able to spend time together working on this project as a team. Grandma and Grandpa were able to spend quality time with their grandson and many happy memories were made. By early spring next year, this coop will welcome baby chicks who will quickly grow into happy, healthy egg-laying hens. I can’t wait! 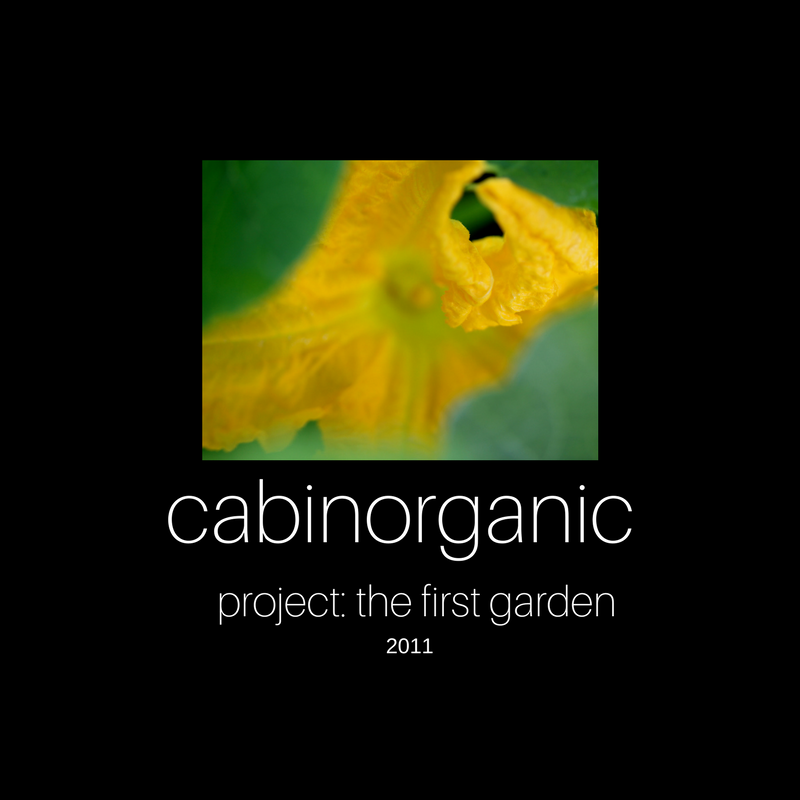 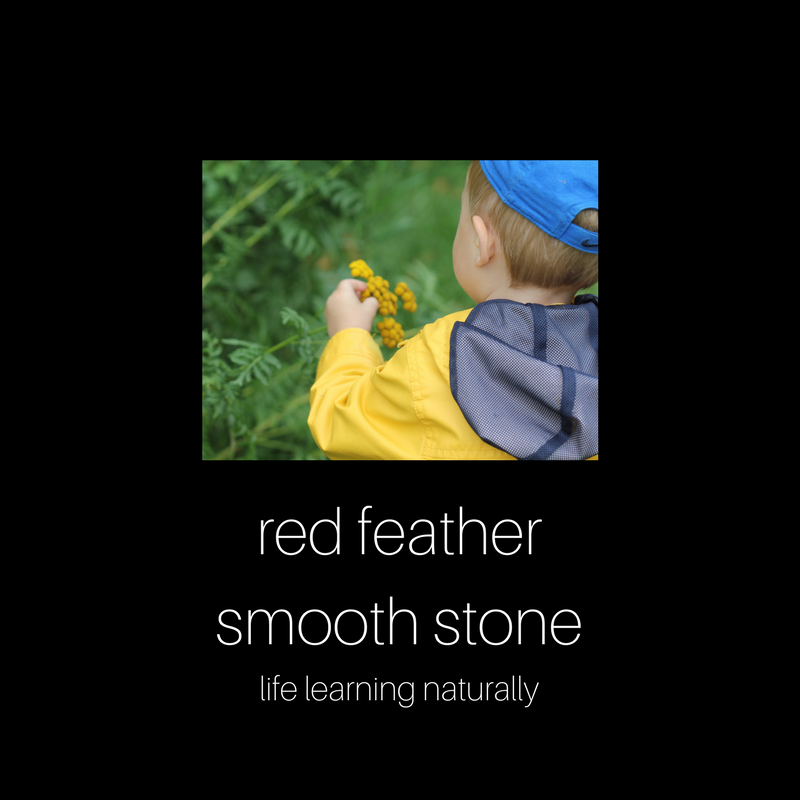 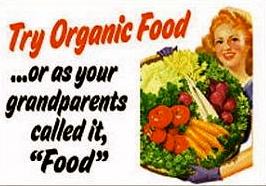 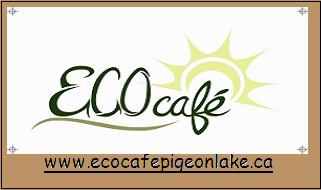